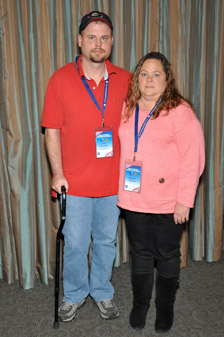 Thousands of severely wounded soldiers, marines, sailors and airmen are facing evictions, foreclosures, utility cutoffs, or other financial disasters. We at the Coalition don’t want turn even one brave hero away or force them to choose between paying bills and buying food.

Year-round we are devoted to serving the needs of our severely wounded veterans. Heroes like, retired Army Sgt. Jason Brunson who got injured intentionally – yes, intentionally – to protect his fellow troops from a terrorist attack.

During a firefight Jason saw a suicide bomber approaching its target – in a much larger truck. “I jerked the wheel and smashed into him head-on, on purpose,” Jason said.

The impact severed his stomach from his esophagus and caused a traumatic brain injury. After being released from the hospital, he said, “I hit rock bottom, financially speaking. We had nothing, no income of any kind. My pride was hurt so badly, I couldn’t ask for help.”

Donate NowFinally his wife, Barbara, found the Coalition to Salute America’s Heroes and asked for help.

Coalition donors provided them with four months’ rent, money for groceries and $500 to provide their family with Christmas presents.

“If it had not been for the assistance of the Coalition, we probably would have been homeless,”
Jason said.

Your gift could help another severely injured veteran just like Jason, who was severely wounded in the war on terror and contacted us for help.

And remember, every week servicemen and women are returning home to face financial disasters after losing their limbs, their sight, their hearing and more while serving our nation. Please give generously.