Sgt. Juan Perez had worked construction as a member of the Detroit Carpenters Union for seven years when he enlisted in the U.S. Army in May 2002, one of many new soldiers caught up in the urge to defend the country after the attacks of 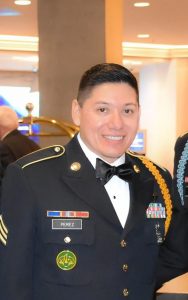 9/11. He served two tours of duty in Iraq. “I got injured in 2005 in my second deployment,” he said. “I was getting ready for a mission while in the Green Zone for a security convoy into downtown Baghdad. As a gunner and security detachment supervisor for a lieutenant colonel, it was my duty to get all vehicles ready for the mission. While I was getting some ammo cans ready for this mission, one of the industrial strength bungee cords used to tether heavy equipment, a heavy cord, broke loose and hit me in the head. I lost sight in my left eye and also suffered a traumatic brain injury (TBI). As a result I have extreme headaches which require me to carry shots, cluster headaches (which require the use of oxygen for control), seizures and post-traumatic stress disorder (PTSD). In the same incident, I was knocked off my Bradley vehicle and thrown for about 10 feet, leaving me unconscious. I landed hard on my back which led to serious injuries of both shoulders because of the way I hit the ground.”

Juan was immediately airlifted to a secure location outside of Baghdad, and later moved on to the U.S. medical facility in Germany where he stayed for three weeks. It was determined that his injuries required special attention which was available at his home post at Ft. Carson, Colorado, near his home in Colorado Springs. Since that time, Juan has undergone several surgeries for his shoulders and extensive physical and mental therapy for his TBI and PTSD. He has never recovered full use of his left eye. “My full scope of vision consists of hazy back images only. The doctors say my vision is likely to decrease as I get older due to trauma and scarring on the nerves. My disability rating is almost 100 percent.”

Juan and his wife Christy have been married for 10 years and have five children, two of whom are adopted. “When Juan was discharged, he didn’t have a very smooth transition so we actually had to file for bankruptcy,” Christy recalled. “We were at a point where we couldn’t pay the bills. We had just had another baby, there was a lot going on. Juan suffered from PTSD and we were just learning how to live with that. We didn’t know which way to turn. Then the Coalition stepped in. I don’t remember exactly how we heard about them, but they came in, took care of the rent on the house we were renting. They paid about three months’ rent on the house. We were a month behind. And they gave us money to take care of it all, to make sure we weren’t homeless. They just came in and took care of our bills and stuff.”

“I was introduced to the Coalition through a TBI coordinator in Denver,” Juan said. “My family and I were struggling to support ourselves, since I was not receiving benefits at the time. I contacted the Coalition and they were able to assist us with some of our bills until the VA completed work on my benefits.”

“There was roughly a six month time frame between the time Juan got out of the military and the time that the payments and benefits started,” Christy said. “We would have been homeless. We would have had nowhere to live, no car, nothing for our newborn baby or the other three kids we had at the time.”

“Juan’s PTSD is a little bit unique,” Christy said. “It is mostly anger, inability to sleep, anxiety with crowds. His PTSD is more focused on sadness and trauma from not being able to complete his mission, not being able to continue in the Army, that kind of thing. So it’s affected his relationships with people.”

The Coalition’s support did not end with the mortgage. “My husband had been in Michigan for three months caring for his mother who was dying of cancer,” Christy said. “During that time I was a stay at home mom with our five kids when our youngest son developed a new strain of virus that caused him to be admitted to the hospital. So for the three days he was in the hospital, I had no help, no pay, no nothing and the Coalition sent us some money to get us through. We did not apply for aid or anything, they just knew we were having a hard time and so they sent us $1600 to help us out.”

“My mom needed full attention from myself and my dad,” Juan said. “It was just the two of us watching over her until she passed away. For me, it was rewarding to be able to be there with my mom because she’s my mom and I love her. But at the same time I did not know any of this stuff was going on. My wife has always taken care of everything, so I just assumed everything was being taken care of.”

Juan and Christy attended the Coalition’s Road to Recovery and Tribute conference in 2008 which was transformative for them. “We learned a lot from the caregivers’ classes and the classes about children,” Christy said. “Just being able to talk to other people who have similar circumstances. I was talking to a lady whose husband’s symptoms are similar to Juan’s and they also have five kids, so we were able to connect. Not that you would ever wish this on anyone, but having a group of wounded veterans that are together with classes and teaching and learning and then they connect. There’s a connection between the veterans themselves and they are able to open up and a lot of times I’ve noticed coming away from the conference that what Juan has communicated with other veterans has led to a better understanding of how he relates to us. So just sitting around a table talking about how their day has gone and what their struggles are enables us to see our own situation more clearly and deal with our issues better.”

Juan seconds that opinion. “When you do make the connections with some of those families, you walk away with friendship with that family and I stay connected with a lot of the families that I do connect with during the conference. It’s just one of those things where we just email each other. Sometimes one will say, ‘Oh, I’m having a bad day, you have any advice on this?’ Or, ‘Hey, how are you doing today, how’s your family doing?’ Stuff like that.”

Juan and Christy still struggle with Juan’s PTSD and try to manage it. “Juan deals with a lot of anger that occasionally comes out on other people. Being able to process that is difficult for a child. If daddy’s really mad today and you don’t know why daddy’s mad, it’s hard to understand – oh daddy was injured before I was even born. So I know daddy was injured, I know he was hurt, but I don’t know why he’s mad today. I don’t know why he woke up angry today. Conferences like the Road to Recovery give us the tools to teach our children, to talk to them and give them a better understanding.”

“When I’m having a bad day, I don’t scream but I tend to vocalize very heavily and strongly with my kids to let them know that hey, I’m a little angry,” Juan said. “I’ve never gotten physical with my kids. It’s just my PTSD. I assert myself very roughly with my family.”

Right now Juan is working for the Coalition. “I work for the Heroes Thanking Heroes program. I started as a call representative where I called the donors to thank them for their donations, and I’ve been with the Coalition since 2008. I worked my way up to be Senior Lead Representative. I have a group of 6 to 8 people that actually make the calls now. I monitor the calls for quality assurance just to make sure we are on track with our message, to thank the donors and let them know the impact they have had through their donations.”

Juan has long term plans. “I received a Bachelor of Science in Criminal Justice degree from Colorado Technical University. My PTSD does not prevent from working regular jobs. I worked car sales for a while, but that was strictly on commission. I am currently about six classes away from getting my Masters in Secondary Education with an emphasis on history. I want to teach someday.”