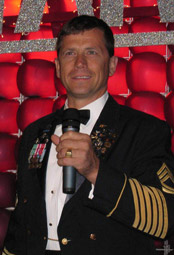 Dana Bowman has astounded the nation and the world with his drive, determination, and will to succeed. He is a retired First Class Sergeant with the U.S. Army where he was a Special Forces Soldier and a member of the U.S. Army’s elite parachute team, the Golden Knights. Dana Bowman is a double amputee. He lost his legs in an accident during the annual Golden Knights training in Yuma, Arizona, in 1994.

On February 6,1994, Bowman gained worldwide attention when he and his teammate Sgt. Jose Aguillon collided in midair during the team’s annual training. Bowman and Aguillon were practicing a maneuver known as the Diamond Track. The maneuver calls for the jumpers to streak away from each other for about a mile and then turn 180 degrees and fly back toward each other crisscrossing in the sky. Bowman and Aguillon had demonstrated the Diamond Track more than fifty times without a mistake, but this time was different.

Rather than crisscrossing, the two skydivers slammed into each other at a combined speed of 300 miles per hour. Aguillon died instantly. Bowman’s legs were severed from his body, one above the knee and one below the knee. Bowman’s parachute opened on impact. He was taken to a hospital in Phoenix where doctors closed his leg wounds and stopped his internal bleeding.

After Dana’s re-enlistment, he became the U.S. Parachute Team’s lead speaker and recruiting commander. Dana has been fortunate to have the opportunity to let his speeches touch so many from the physically challenged to the able-bodied. He strives to show physically challenged people can still work and excel in today’s society and military. Dana emphasizes the words amputee and uselessness are not synonymous.

Dana has given more than 1000 speeches in the last few years and has been featured in magazines such as Sports Illustrated, Reader’s Digest, People and many more. There have also been numerous television programs, which focused on Dana and his story. Some of the programs include: Dateline, A Current Affair, Real TV, NBC Person of the Week, Day and Date and Extra.

Dana retired from the United States Army in 1996. He received his bachelor’s degree in commercial aviation from UND Aerospace in Grand Forks, North Dakota in May of 2000.

Dana spends a great deal of his personal time working with other amputees and disabled or physically challenged people. He also spends time at different military hospitals helping the wounded soldiers during the current world situation. He enjoys visiting patients at numerous healthcare facilities while on the road speaking.