“People like General Singlaub, warriors like him, are so rare. He was one of few that fought in WW2, Korea, Vietnam and even South America. The world lost a true military hero, but heaven gained an incredible protector.” – Donny Daughenbaugh, USMC (Ret.)

There are so many things that can be said about General Singlaub but consider this:

“Singlaub, now a captain, was instrumental in the liberation of hundreds of Allied POWs on Hainan Island following Japan’s surrender.”

Below you will learn about General Singlaub’s very distinguished career.  But among the many amazing things he did in that career was saving those POW’s from certain death and for sure years of torture.  He did not leave any man behind.  And still today, General Singlaub’s care for the veteran has not changed one bit.  He is still fighting for them and now their families.

Major General John K. Singlaub, U.S. Army (Ret.), enjoyed a long and distinguished military career, dating back to World War II. After being recruited by the Office of Strategic Services (OSS), he parachuted into Nazi-occupied France as a covert operative to prepare the French Resistance fighters for the D-Day invasion. Following the war, General Singlaub headed CIA operations in Manchuria during the Chinese Communist revolution, served as supreme commander of all U.S. troops in South Korea, and performed intelligence missions in Vietnam.

For his dedication and bravery, General Singlaub was awarded many military honors, including the Distinguished Service Medal, the Legion of Merit, the Air Medal, the Bronze Star and the Silver Star, with all of those except the last accompanied by at least one Oak Leaf Cluster. In 1991, General Singlaub published his autobiography, Hazardous Duty: An American Soldier in the Twentieth Century, which recounts his exploits during more than four decades of unconventional warfare, espionage, covert missions and front-line action. Best-selling novelist Tom Clancy praised the book as “the odyssey of an American patriot.”

General Singlaub held many positions in an advisory role with the Coalition to Salute Heroes for many years.  We are truly grateful for that and we appreciate the wisdom and direction he provided!

“Our hearts are heavy as we announce the passing of an extraordinary ambassador for the Coalition – and even more exceptional American. Major General Jack Singlaub, a great American hero, died Saturday surrounded by his lovely wife Joan, and other family members. Jack was 100 years old. Jack’s friendship to Cathie and me meant the world to us, and we were so very blessed to know him, call him friend and a brother in Christ. We will miss him dearly. Our prayers are with Joan and the rest of the Singlaub family during their time of mourning.” 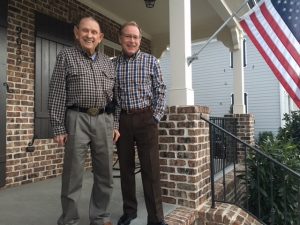