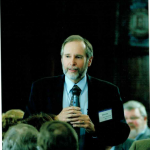 Bruce M. Kelly joins the Coalition’s Board of Directors after a distinguished career in government relations, law and the United States Navy.  Mr. Kelly recently retired after serving as Director of Government Relations for the Mayo Clinic, where he was responsible for representing the world-renowned health care system on legislative and regulatory matters in Washington.  Previously,  positions included Health Counsel for the U.S. Senate Committee on Finance and Staff Attorney for the U.S. Senate Office of Legislative Counsel.  He served the United States Navy in both active duty and on reserve status from 1971 to 1976.  Mr. Kelly earned a BA in Political Science from Fordham University, a JD from the University of Virginia School of Law, and an MS in Environmental Science from George Washington University.  He is a native of Buffalo, NY.