Antonio Mullen was what is affectionately called “an Army brat.” Both of his parents served in the U.S. Army. Fresh out of high school, Antonio joined the U.S. Army on September 11, 2003, the anniversary of 9/11. Born to a military family, he 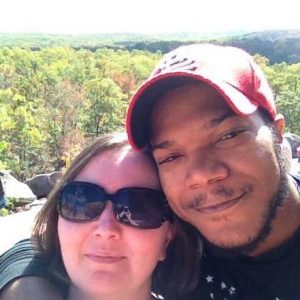 felt it was his turn to serve his country just as his parents had done.

Tony had a knack for mechanical things and became a heavy/light wheel mechanic. He performed his basic training in Fort Leonard Wood, MO, and from there he was sent to Korea where he served for a year. After that he was sent back to Missouri for a few months before he was deployed to Iraq.

During that brief final stint, Tony met and fell in love with Lacy. “I already had a son before I met Tony,” Lacy said, “and on our wedding day my little boy walked me down the aisle to the man he today knows as daddy.”

Tony completed his first tour in Iraq and rotated back to the states. “Tony was only home for what seemed like the shortest year of our lives before returning to Iraq,” Lacy said. “However, this time when he got on the plane, I was five months pregnant with our daughter. He wasn’t able to get home for her birth, but we were able to stay on the phone during the entire labor and delivery. He named her America; he wanted her to know that he risked his life for his country twice and would risk it for her forever! He met America for his brief two week rest and recovery when she was two months old and did not see her again for eight months.”

During his second tour in Iraq, Tony was more or less in combat conditions spending most of his time “outside the wire” in uncertain ground repairing military vehicles, often under fire. “He was the sergeant in his motor pool. He was shot at many times and even faced a suicide bomber,” Lacy recalled. “But the pivotal injury occurred when Tony’s Forward Operating Base was attacked while he was working on top of a Humvee. The blast from the explosion knocked him off the top of the vehicle flat on his back, hitting his head. The head injury cause a traumatic brain injury (TBI) and contributed to post-traumatic stress disorder (PTSD).

Tony was rotated back to the states and posted to Fort Hood where his injuries could be assessed and treated. Initially the doctors focused on his physical injuries and were slow to recognize the TBI and PTSD. “While stationed in Texas, Tony had many appointments with doctors trying to figure out what was wrong with him beyond the physical injuries. At the time I was unaware of PTSD or its symptoms and felt as though I had lost part of myself because it felt as though my husband hated me. After doing my own research to find out what could possibly be wrong with my husband, I felt like PTSD was the most likely answer. He eventually had a breakdown and was placed in a facility for 30 days. This is when he was officially diagnosed with chronic PTSD and started the process of medical retirement.”

Since Tony retired from the service, with an 80 percent disability rating. he has been to several surgical consultations for injuries to his back, knee and hip, but as yet no surgery has been scheduled because the physicians have yet to decide which surgery should be performed first, and the precise procedures required for each.

“Tony’s retirement was also when we began our healing and recovery process as well,” Lacy said. “We have now been together 12 years and will celebrate our 12th anniversary in December. We added a little boy to our family and now have four children. We also have a little dog that we have had almost as long as we’ve been married and she has become a grand asset to the family. She has been therapeutic not just for my husband but for me and the kids as well. More recently, the kids adopted a six year old pug that was in danger of being put to sleep.”

Tony has completed work on a bachelor’s degree in criminal justice and hopes to become a drug and alcohol counselor for military veterans. “This was his goal as he is a recovering alcoholic who was self-medicating due to his PTSD,” Lacy said. “But now that he has the degree he is too anxious to attempt an internship to complete the goal and actually receive his paper degree and get a job.”

Through a mutual friend, Lacy acquired a part-time job with the Coalition’s Heroes Thanking Heroes program. “I am so happy because it was to a point where his check just wasn’t cutting it anymore,” she said. “We have been stable, but when extra expenses come along, like these three little ones beginning a new school year, it makes it a little hard to squeeze that penny any more. Now with the work for the Coalition, the little extras aren’t as hard to handle and I am still able to stay enrolled in my part-time college courses, as well as assist my love through those hard days and nights with a little more ease. I have great flexible hours so I am still able to help him get to his medical appointments. It is really like no job I ever had before. It has become more of a blessing than just the pay. Speaking with those who have been so generous really gives my heart a little extra strength just by hearing how much they care and support my family and millions of others.”

Lacy has no complaints about her situation. “I knew when I married him there was a chance of an injury and even the possibility of becoming a widow,” she said. “But until I heard he had been injured, that’s when the reality began to sink in. Immediately, I felt the need to jump into action, researching and asking a million questions. ‘Will he ever get better?’ ‘What can I do to help him?’ ‘How will this affect our family’s future?’ It’s hard to hear the answers to some of those questions, though. ‘No, he will never get better, you will all just learn to adapt. There isn’t much you can do except be there for him. This is going to be hard for your family.’

“Antonio has chronic PTSD, TBI, a back, hip and knee injury, as well as tinnitus,” Lacy said. “I have become his counselor, physical therapist, nurse, taxi, calendar and so much more. Some being what any spouse would do, and others, well, a little higher call to action. Planning things goes a little different than it used to. There is little to no spontaneity due to his PTSD and TBI because this could be a trigger for something unpleasant. Where anyone could stop by at any time before now, everyone knows they need to give a bit of notice so the doorbell doesn’t cause a panic. When we go out, we must take a note of all exits and access a seating location accordingly, adding that we need to try and have a wall at his back.

“Though our family has struggled, we are still in a healing process that will never be fully over,” Lacy said. “We constantly find new ways to work through the hard days when he is in so much pain he can hardly get out of bed; or those nights when the nightmares do not allow him to rest and the medication isn’t cutting it. We even have times when we are trying to have a normal family day out and his anxiety begins to overwhelm him. We will continuously be thankful that we still have our hero. Even if he is banged up and bruised a little and when others look upon us in judgment because he doesn’t ‘look’ like a disabled veteran because he still has all his extremities attached.”

Lacy insists that being a caregiver is a choice she made. “I have gotten so frustrated by hearing people say to me that they are sorry that I must be my husband’s caregiver, that it’s not fair because I am so young. That they hate that I am missing out on so much. Being a caregiver is not an easy job sometimes, but I wouldn’t change it for anything. I don’t see it as unfair or that I must do it. I feel like I am rewarded with the ability to show my husband just how much I love him. I am fulfilling part of the promise I made when I said till death do us part. I don’t feel like I’m missing out on anything. In fact, I feel fortunate in that I have someone to take care of. So many have lost their hero and I still have mine, uniquely battered and bruised in his own perfectly imperfect way.”

Lacy credits the Coalition for providing her and others support in their challenging roles as caregivers. “It has been a valuable resource to me and my family both in helping us make ends meet but also enabling me to talk to others who are also caregivers, or speak to veterans who can share similar experiences, so I can have a greater understanding of how to help my husband and family get through things.”