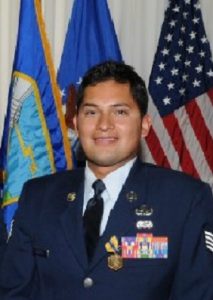 Staff Sergeant Daniel Acosta (USAF, Ret.) is one of the relatively few wounded veterans who did not serve in the Army or Marine Corps. A native Chicagoan, Dan joined the Air Force right out of high school in 2002 where a combination of natural skills and opportunity led him into a highly charged career path – explosive ordnance disposal.

Daniel’s training in explosive ordnance disposal included 11 months of technical school at Elgin Air Force Base in Florida, and was assigned his first duty station for three months pre-deployment training at the Utah Test and Training Range at Hill AFB in Utah, about 30 miles north of Salt Lake City.

Daniel was assigned to the 775th Civil Engineer Squadron at Hill Air Force Base. From there he was dispatched to Iraq in 2006 as a member of the 447th Expeditionary Civil Engineer Squadron. Explosive ordnance disposal specialists were in high demand, then and later. Daniel underwent nearly three weeks additional training in Kuwait before deploying to Sather Air Force Base at Baghdad International Airport. He had been in Iraq performing missions for three months when he was injured.

On December 7, 2006 he was sent to disarm hidden improvised explosive devices (IEDs) and had disarmed two when the third one got him. “I stepped on a pressure plate,” he recalled. “It wasn’t detected (by the metal detection device) because it was wood.”

The IED that nearly claimed his life contained two 122 mm projectiles, Daniel said. His left arm was blown off in the blast and he received third degree burns to his legs. He also sustained arterial injuries to his leg and heart.

“In the back of my head I always knew something could happen,” Daniel said. But he and his fellow airmen on his team had undergone combat life-saving training at Ft. Carson, Colorado, and he attributed that training applied by his teammate Staff Sgt. Joe Upton to his survival. The first tourniquet Upton used did not stop the bleeding from his severed arm so Upton took a water tank strap off a Humvee and was able to use that as a tourniquet. Also, Daniel said there was a Medic on the scene. “They (the doctors) gave me a 25 percent chance of living,” Daniel said. “They said if I made it through surgery, I would have a 50 percent chance.”

Later Daniel’s marriage broke up as he was in the process of leaving the military, but he does not attribute that to his injury. “It was not related to that,” he said. “It was a communications issue.” Daniel said the wives of injured veterans do have a difficult job. “Spouses have the harder job,” he said. “We’re prepared for things like this, but they aren’t.”

Daniel said he has avoided the perils of post-traumatic stress disorder (PTSD) and traumatic brain injury (TBI). “The Veterans Administration rated me a minor case of PTSD. But I accepted the reality of my injury early on. I get around well. The injuries are there, sure, but I am capable of doing a lot. I play different sports. I am enjoying life.”

Daniel was not one of the many who received financial aid from the Coalition to Salute America’s Heroes when he returned from the battlefield. “I received no direct financial assistance,” he said. “I didn’t need it. My benefits came through fairly quickly. I am a modest guy. I don’t ask for help if I don’t need it.”

But even so he has developed a close working relationship with the Coalition. “Early on in my recovery I learned about the Coalition through one of their reps at the hospital,” he said. “My initial involvement was to attend the Road to Recovery Conference in 2008. That was a positive experience that helped me get moving in a positive direction. I enjoyed the time with other wounded veterans and benefitted from it, sharing our experiences, talking to other people who have been through the same thing. I wanted to be an active member of society and continue with my rehabilitation.

“I support the Coalition through being an ambassador for the program and doing things on their behalf,” Daniel said. “I come into contact with many guys who are in a much worse situation than I am. I have seen them dealing with their injuries first-hand, physical and psychological. A lot of guys cannot handle it and it’s easy for me to see why. When (Coalition President and CEO) David Walker asked me to help host a fund-raising event in California, I was glad to participate.

“The Coalition’s primary role is to provide direct financial aid to wounded veterans returning from the war zone who have to wait a long time for their benefits, sometimes for months,” Daniel said. “In the meantime they have bills to pay and are unable to work. The Coalition helps fill that gap. Every veteran has a unique situation. When they are severely injured the transition time is difficult and financial aid is vitally important. Our veterans are not prepared for what they encounter. I don’t believe the military does a very good job of preparing personnel for that situation.

“It is important to wounded veterans to feel that they are part of a larger community,” Daniel said. “They want to know the community supports them. The Coalition fills that role and it is an important one.”