Devin Marshall was in the civilian work force when he felt the call to serve his country. He was working as an HIV counselor for the county, a job he found discouraging and unrewarding. “I was working for the health department, going around 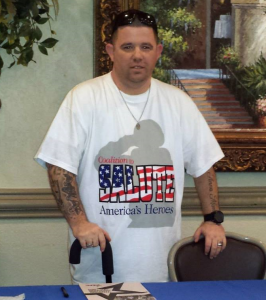 testing people for HIV. It was an emotional subject. I felt like the grim reaper out there, and I never made much money.

I was ready for a change. I wanted to do something different. My brother-in-law was in the military and he said it was a pretty good deal. At the time I was working two other part time jobs in addition to the county work in order to make ends meet. So I had three jobs. I was thinking in the Army I would only need to have one job.”

Devin and his wife have four children from her previous marriage, two boys (each pictured below) and two girls. “My youngest stepson did what they call a delayed entry program. He went to basic training when he was still in high school. I was watching that from a distance. I thought I could do everything he is doing, even though I am a older. So I went to the recruiter to see if he would be honest with me. He said he saw no reason why I couldn’t handle it, I was well within the age limits. So there were no doors being closed in my face, no one was discouraging me.”

So Devin enlisted when he was 28 years old, rather old for a new Army recruit. “I was quite a bit older than most. In basic training the average was 18-22 and once I got there, my age was noticeable.”

But after he got through basic training, the age difference faded from view. “Other guys were my age or older,” he said. He was just another soldier.

Devin enlisted in September 2007. “By the next June, I was in Iraq,” he said. “I served only one tour from June 08 to June 09. That’s when I was wounded by a mortar that landed probably 35-40 meters away. The concussion from the blast threw me out of my gunner’s seat in the Humvee. I went over the top and landed on the hard ground at a weird angle. With all that heavy gear it was a massive fall. It twisted my neck while my body went the other direction. I ruptured some disks. I was knocked out for 10 minutes, or so I was told.”

The enemy had studied troop movements and placed an IED where one of the other platoons had been. “They knew we would respond,” Devin said. “As soon as we did, they started raining mortars on us. That’s when I got hit. They took me to the field surgical team. I was there for probably a month. They were going to send me to Germany, but I kept arguing with them. I did not want to come home by myself. I wanted to go with my guys. I wanted to be with them. I said put me on light duty, whatever work you can find. So they put me on light duty operating a radio because I could not pick up a weapon.”

“The day of my injury I did not know how badly I was hurt,” Devin said. “We were on a quick reaction force trying to get guys out to where the IED was. I was disoriented. I didn’t even know until everything was over that day how bad my injury was. Later I went out on a mission and I could not get comfortable in my seat. I had a lot of pain, numbness in my left arm and fingers. That is what initiated my medical review. They realized I was hurt much worse than anyone thought.

“I was sent to Fort Knox in KY and I figured I would deal with my injuries when I got there. They had told me I needed to get into the war transition unit (WTU) where I could get therapy. But the WTU there was very small and did not have the facilities I needed. I stayed in a regular unit there for 4-5 months waiting for slot to open in Fort Hood, Texas, where the Army has much better facilities.

“I needed to deal with some of my problems. At the same time my wife had become ill, and was making a long trip, two hours each way, to get the care she needed. They eventually sent me to Fort Hood in Texas, and she came with me.

“The medical board at Fort Hood gave me 100 percent for both post-traumatic stress disorder (PTSD) and a traumatic brain injury (TBI). When I was first going through all these evaluations and interviews, I got caught up in the bureaucracy.

The Army does the initial rating, and then the VA does another one. The Army focuses on what you can’t do physically. The VA covers more ground. The Army just decides if you can do the job or not. Afterwards, you can take Army rating or the VA. The VA offer is usually more generous because they can rate things the Army cannot. I went to all the medical appointments with the Army and then the VA. Because of my head injury, I have cognitive issues. The VA ruled me incompetent to take care of my finances now. My wife agreed to be my caretaker. I am getting better with remembering things now, but it took a while. They started the process in 2010 and I did not get out of the service and fully retire until 2012. “

At the same time Devin was shipping out for Iraq, Joy Marshall’s two sons were also getting ready to ship out. “I was new to military life and a long way from home,” Joy said. “My two amazing daughters had so much strength and helped during this time when my family was facing back-to-back deployments. At the time my oldest son was into his first deployment and since then is still serving in Korea, Jordan, Kuwait and other places. My youngest son also served and today suffers from post-traumatic stress issues.

“Devin’s recovery has been slow but steady,” Joy said. “His recovery consists of going to doctor’s appointments as well as group and individual counseling.”

Joy suffered from understandable anxiety, but “is fine now. She was having some issues. The doctors were focused on me. They just wrote prescriptions for her. They were not really focused on her care, and what she needed,” said Devin.

“After medically retiring, we struggled with waiting on VA benefits and had to call upon the Coalition for help,” Joy said. “They went above and beyond helping us with emergency assistance and enabled my family to go to The Road to Recovery Conference in Orlando, Florida. I am currently working with the Coalition’s Heroes Thanking Heroes program which enables me to work from home while taking care of Devin, and helps out with the bills.”

“We live in Fort Hood,” Devin said. “It keeps me connected to the community here, seeing the guys, talking to them, interacting with them. I still feel like a part of what is going on. That helps me feel like I’m connected. “I have done some little jobs for the Coalition,” Devin said. “The Coalition has been so good and gracious to us. I am making progress. I use a cane for balance. In addition to cognitive issues, I have some physical injuries such as ruptured disks in my back and neck. I am homebound, not allowed to work. I go to DC two or three times a year, do some medical research. I have learned how to read medical research grants. We look for new ideas, medical devices and things on the cutting edge. All kinds of people involved. We choose which ones are the best candidates for grants. It keeps me busy. I get to rub elbows with doctors and PHDs. They pay me a little bit and I get to travel.

“The Coalition is a key part of our lives,” Devin said. “They kind of adopted us. Great people work for that team. They are always checking up on us. They have been life savers for us. They really care.”