Donny Daughenbaugh (pronounced doffenbah) was born and raised in Des Moines, Iowa, and today, like many former military personnel, lives in Texas. “I’m still a Yankee by Texas standards,” he said, “but I am working on that.” Donny enrolled in ROTC while attending Lincoln High School in Des Moines. He had little military tradition in his family but he was attracted to the discipline and military principles offered by the ROTC program. 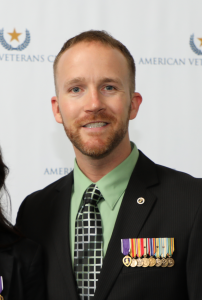 Then one day, Donny was at a public event in Des Moines where a Marine color guard was going through its paces. “I had seen them before,” he said, “but for the first time I really noticed them. Those ramrod straight Marines in their dress blues were very impressive. I knew then and there I wanted to be a Marine.”

Donny joined the Marine Reserves. “I was a Hollywood Marine taking basic training in San Diego,” he said. “After three weeks of boot camp, I decided that was enough for me. But if you want to quit the Marines, you have to discuss it with instructors. They talked me out of it and I am glad they did. Not quitting was probably my best decision. Once you’re a Marine, unless you do something really stupid, you are always a Marine.”

After going through basic training in San Diego and completing training, he began working as an apprentice for a carpenters’ union in Des Moines. He became an accomplished carpenter doing both finished work and rough-ins. He had a viable work skill and was earning a decent living. Somewhere along the line he met and fell in love with the woman who would become his wife – Sarah – an insurance claims representative.

In February 2004, Donny and his fellow Marines in the Reserve heard they might get activated due to the conflicts in Iraq and Afghanistan. On June 1 they were activated at Camp Pendleton in California. They spent a long summer in rigorous infantry training and by September were posted to Iraq.

“We were southeast of Fallujah which was the scene of heavy fighting,” Donny said. “We were conducting Operation Phantom Fury, and it was hot. A lot of the bad guys were being driven out of town and were coming our way. Some of the local people were nice to us but others were being told by their religious leaders to do bad things to us. We began to take casualties from improvised explosive devices (IEDs) and vehicle borne explosive devices (VBEDs). We were getting shot at all the time, but were ordered not to fire back for concern about civilians.”

Donny went through a culture shock in Iraq. “In our country we have running water, cars, concrete roads, infrastructure,” he said. “Baghdad was similar to U.S. but we were in the Sunni Triangle, the Triangle of Death. The people there live in mud huts without running water or electricity. They drew water from putrid canals befouled with dead animals and oily wastes. They had lesions and sickness because of that water. Illiteracy rates were very high. They followed religion, but as it was interpreted to them. They could not read it themselves.”

The heat also took a toll on the troops as the mercury often soared above 110 and stayed there for days. “My bullet proof vest weighed 30 pounds. Altogether each one of us was packing about 75 pounds of gear. We always needed water, so we had to carry extra bottles. With all that weight, we wore out our boots. The ground is hard over there.”

Donny said some of the locals felt bad about what was happening and gave them a tip that the bad guys were using a car to move their mortar tube around. “So we set up an impromptu vehicle checkpoint,” he said. “This car pulled up to us. It was red in a place where most cars are bland colors. It was very clean too, which was unusual. There were 13 in our squad that night, including an interpreter. As the car came near, and we were using flashlights looking for a mortar, the driver started yelling at us. He sped off like in a war movie. We were in a staggered ranger column to prevent any one shooter or bomber from taking all of us. As he sped off, one of our guys opened up on him. Driving in reverse, he pulled a gun out from under the seat. My guys on either side had cover but I was exposed. Just as I was hitting the deck, pulling my weapon up, I saw a couple of flashes from his muzzle. I saw the dirt kick up in front of me. I felt like I was kicked by a horse. I blacked out. It happened fast but it was in slow motion. The car crashed as our people were shooting at it. I was first team leader so I had the most expensive equipment. The guys were taking those things from me because they needed them, and I was not able to help. I was given a shot of morphine. It took 45 minutes for them to come pick me up and things did not look promising when they got there. I had been shot in the face.”

“I was bleeding and having seizures. When the guys put me on the Humvee they thought I was dead. Back at the base, it was surreal as if everything is going 200 miles per minute. You see all these people moving around but you don’t know what is happening. The bullet broke my jaw and disrupted my nerves. A doctor was probing for the bullet, looking for an exit wound.”

“Then the Battalion Commander came in and then the Battalion Sergeant Major came in too, which is not a good sign, telling me they got the bad guys. I was wondering if I was going to die. I had been there two months and never seen a helicopter before. Then one shows up. ‘What that for?’ I asked. They said, ‘That’s for you knucklehead, we’re taking you to Baghdad.’ In Baghdad, they told me the bullet was up in my jaw and they had to find it. They finally found it at the base of my skull. They decided to leave it there because taking it out would be more dangerous.”

On the first day after his surgery in Baghdad, a backpack bomber blew himself up in the Green Zone where Donny was – the first time that had happened. Donny recalls, “I was there waiting to be shipped to Germany. I was wondering what else can happen? I was finally sent to Germany and was there two weeks and then sent to Bethesda, Maryland. My wife was flown in that same day. When I finally got back to Des Moines, I got a great reception. Many people came to see me. It was great to see family and hold my daughter, Gabby, who was very young when I shipped overseas.”

“They never got the bullet out,” Donny said. “I was told it would calcify and become part of my body. That has not happened. There is always pressure on the nerves. But I was lucky in that it did not leave much of a scar. When I was in the hospital in Germany, the guy next to me had lost half his face. He said, ‘I hate people like you. You got shot in the face and look fine, I got shot in the face and look like a monster.’ I never took his words for granted. I have a substantial injury but not so obvious. It was rougher for him, a lot rougher.”

“Coming home was tough,” Donny said. “My wife had lived a year on her own with my daughter, doing their own thing. That first year back was a hard year for us. We went through counseling. We grew together, grew stronger.”

Back in Des Moines, Donny tried to return to his carpenter’s job but found that his injuries impeded his capacity. He experienced intense headaches and seizures. “Recovery is a funny word,” he said. “You recover from some things, but some things only get worse. I noticed that I was always tired during the day because of the nerve damage. I had problems with aphasia and with swallowing.”

Donny’s tongue had atrophied, a process that had started almost immediately because of the nerve damage. “I did not appreciate how much your tongue is important to your jaw line,” he said. “My teeth were caving in on one side. I had trouble getting my dental problem tied to my injury. The VA dental chief said my jaw collapse was caused by a previous condition that was only aggravated by the wounding. My claim was denied. It does not take a lot of intelligence to see the connection between being shot in the face and a jaw collapse. I finally got the dental taken care of, and my jaw is back to looking as it should. My paperwork was done for me by Vic Tate at the VA in Des Moines. By the time I got out of the Marines, I was at 80 percent disability.”

In Des Moines, Donny met some people from the Coalition to Salute America’s Heroes that hosted him and his family at ball games and other social events where other wounded veterans were assembled. He began with the Coalition as a volunteer, helping to provide outreach to wounded veterans that were unaware of the services offered. His volunteer work led him to a position within the Coalition’s work from home program, now called the Heroes Thanking Heroes program. Donny was able to learn early on the importance of a personal connection with the donors that make the Coalition’s programs possible. Today Donny serves as the Regional Vice President of the East. His area of responsibility – as he as he puts it “everything east of the Mississippi” – from outreach at VA hospitals, immediate peer to peer support and the ability to address the less demanding financial needs of wounded veterans.

“My struggles and challenges and issues with my wife have enabled me to be a stronger advocate for other injured vets,” Donny said. “Had this not happened to me, I would have no idea what was happening to these families. The message I convey is, this looks like the worst possible thing, but you can make it work for you. An injury is very disabling when it happens, but it enables you to do new things.”

Like many veterans, Donny has post-traumatic stress disorder (PTSD). “I wake up several times a week and do not know where I am,” he said. “My wife wakes up. She says, I am Sarah, you are home, you are in bed. I look around, realize what she is saying, I calm down and lie back down.”

Donny is an outspoken advocate for education and urges other veterans to take full advantage of their benefits. “I have certification from the union equivalent to an associate’s degree, and am now working for a full business management degree. My kids – today we also have a little boy named Kollin and a new baby girl (Everleigh) – will have to go to school. College for them is not an option; they will go. I will get my degree. The aid is available. It is foolish to throw it away. Veterans can use the money for skill training, certification, whatever they want to do.”