Originally born in Dominican Republic, Hugo Gonzalez grew up in Puerto Rico. A U.S. citizen, he joined the Puerto Rican National Guard in 1995. “I saw it as the best way to obtain both civilian living and military aspects and enable me to 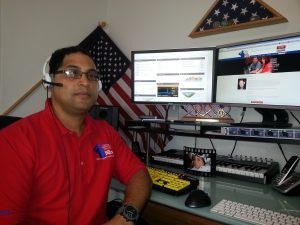 finish my college degree,” he said. “At the same time, I obtained the military experience that the Guard provided.”

Hugo attended Sacred Heart in Puerto Rico where he earned a B.A. degree in communications. “When I got my diploma, the war was reaching its highest point,” he said. “The second step of my plan was to join the regular army, follow an officer’s career, and learn a third language, either Korean or German. I thought I would be able to get a master’s degree in Europe. That would enable me to do many things. First, of course, I would do my little part in this big ordeal in Iraq, but after that I had big plans. I would go on to accomplish another degree, get another language, and come back an officer.”

Hugo was assigned into a unit of the Big Red One (First Division) in Germany in 2004. “I was supposed to be in artillery work, but my unit had already been sent to Iraq where they were waiting for us. It took me about six months from the time I started my career till I was actually sent downrange to be part of the war.”

Like other soldiers in artillery units, Hugo discovered artillery was not of much use in the Iraq theatre where most of the fighting was close in with terrorists. “The closest I have been to artillery was a round that hit us,” he said. “They had no special use for us in the war. We were out doing patrols, escorting VIPs, pulling guard duty and enforcing the curfew after 11 pm. I was in the city of Baquba which is in the Sunni Triangle.”

“I was in many firefights, almost every day I was there,” Hugo said. “We were passing through the same places over and over again, getting used to the environment, the same streets, the same places. When you are familiar with the layout you find yourself looking for something different and get ready. It was almost daily. After a fight you get the powder out of your nose with baby wipes. We have an unofficial rule that if you get out of a firefight without powder in your nose you have to load everyone else’s magazine.”

“I had survived several IEDs. In a Humvee squad, they always attack the second vehicle. They know the first vehicle has orders if something happens to hit the gas, as does the last vehicle which goes in reverse. But the second is hemmed in and can’t move. So you learn to expect that.”

“I was there about six months before I got hurt. The night of June 21, 2004, we were on patrol. My squad got ambushed. They set up an ambush with an IED. That night we were looking for an IED maker in that town. There was only one way in and one way out. I was riding with my buddies in a vehicle without armor. We called it “the bucket” because it would take whatever you throw into it. The only protection we had in those vehicles was an extra bag of sand.”

“That was a whole process to be moving about in that bucket,” Hugo said. “I had made a turn in that bucket the night before. This night I ended up covering for another guy. The sergeant in charge of assigning those positions, who was a friend of mine, assigned it to me. I argued with him a bit. He asked me if I was scared. I said, ‘Yes, I am scared.’ He offered to put me in another position. But that would have made for a whole change of situation making someone else take my position. I would never let that happen. When somebody takes your place and gets hit, that is like a black cloud that goes on top of you. You would always know that was your bullet.”

“So I said, ‘I am going.’ We rode through the black cloud of the night. It was a slaughterhouse. When we got over there, we realized a lot of things were happening. They were messing with our minds. There were a lot of people out after the curfew which usually means trouble. When you see a lot of women and kids, you are okay. But when you see they are dispatching the kids and kicking the women on the back to go away, you know there is something up.”

“We got out of there in a hurry, but too big of a hurry,” Hugo said. “We did not check for IEDs. There was a tremendous blast. That’s all I can remember. I got a traumatic brain injury. The blast crushed my skull inward. Pieces of my skull penetrated my brain. I was also shot in my face and arm. The doctors had to remove pieces of my frontal lobe. One piece of shrapnel went through my left eye and left a hole in my retina. That’s my good eye. I lost the other one. All the pressure in my head crushed the optical nerve. The left eye is all I have left, but I am grateful to the Lord that I still have partial vision. I can still see my children smile at me.”

“I was evacuated first to Balad where they saved my life with a split second decision. They opened my head, removed pieces of my skull, and cleaned my brain. The amazing thing is that after all that, I can still articulate. I have friends with less damage who cannot swallow their own saliva. Their brains forgot how to do it. I am thankful I can articulate my thoughts.” “They sent me to Balad, then to Koma, and then to Germany for further evaluation. They decided they could not handle me there and sent me to Walter Reed in Maryland, where I was for two years recovering in therapy. Today, I am out of the service, discharged with 100 percent disability.”

“I knew about the Coalition but had never had anything specific with them. But once I got out of the military cocoon and started into real life, I fell behind with one of my mortgage payments. First one month and then two months while I waited for my pension to come through. At that time, I did not know mortgage companies do not accept partial payments. They want it all or nothing. They were sending foreclosure letters. I was afraid we would lose our house. I contacted the Coalition to see if they could help me. They came back with the two payments I owed which enabled me to use what money I had for other needs. They explained they did not want to come with a band-aid solution and leave me with a bigger problem.”

Today, Hugo is working part-time with the Coalition’s Heroes Thanking Heroes program which enables veterans like him to work from home to call donors and thank them for their support. “I am letting these fine American patriots know their money is being well used,” Hugo said. “Sometimes I want to be able to do something more. I would love to wear my uniform every day, and I am proud of my scars and stripes.”