Staff Sergeant Jack (J.D.) Williams grew up in Montana where he learned to hunt wild game with a rifle. His eyesight was 20/15 and he seldom missed. He joined the U.S. Army right out of high school where his shooting skills were duly noted and appreciated. He became a sniper and 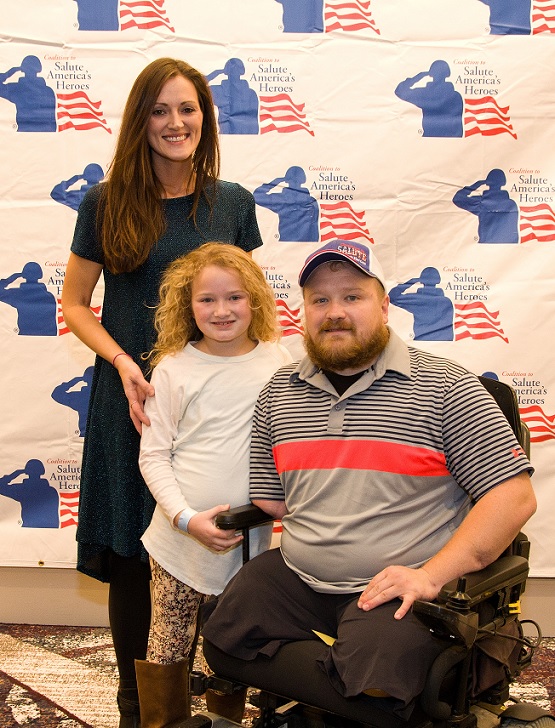 a good one. In three tours of duty in Afghanistan and Iraq he was credited with 125 confirmed enemy kills. But on October 9, 2010, on patrol in southern Afghanistan he stepped on an improvised explosive device. It was in fact a plate bomb designed to take out Humvees and other heavy military vehicles. Instead its full force was vented on Williams who lost both of his legs above the knee and one of his arms above the elbow in the blast. “My remaining left limb was severely mangled and both of my lungs collapsed,” Jack said. “I remained conscious until I reached the hospital in Kandahar. “I was later told that I was clinically dead for 15 minutes,” he said. “The doctors performed a thoracotomy, a cardiac massage, and brought me back to life.”

Jack reports that experiencing clinical death for more than three minutes almost always results in traumatic brain injury “but not for me. While I suffered horrible physical wounds, I have no brain injury. Nor do I suffer from post-traumatic stress. That’s why, despite losing my legs and arm, I am truly blessed. I am clear-minded and clear-eyed. I don’t suffer from the mental and emotional hardships that lead some of my wounded comrades to consider suicide, and far too often to commit suicide.”

This is not to suggest his recovery and return to civilian life was a cakewalk. Jack spent two long years of “gruesome recovery” at the Brooke Army Medical Center in San Antonio, Texas. Afterwards he retired from the Army in December 2012 and returned to his hometown of Woodburn, Kentucky – near Bowling Green, home of Western Kentucky University. Jack’s wife Ashlee and his daughter Kaelyn had been with him through rehabilitation and the three of them were determined to make a normal life on their own. “My family was struggling to reintegrate into civilian life,” he said. “My wife could not find a balance in caring for me and being my wife. I could really see it taking a toll on her. I began worrying for her health and wasn’t sure how to cope with the issues we were facing. At one point, we would just not leave the house. We secluded ourselves from the love and support that we needed most. We were at a breaking point mentally and physically. I knew if we didn’t do something, if I didn’t help my family find our balance, that we wouldn’t be able to give our daughter the life she deserves.”

Jack credits his wife for helping him through a tough readjustment. “Like any military wife who is faced with the unexpected, my wife has definitely had some difficult times,” he said. “Everyone calls the wounded warrior the ‘hero’ but in my mind, my wife is the hero. She’s the one that sat by my hospital bed for countless hours, changed bloody bandages on a daily basis, lifted a heavy wheelchair into the car every time we went somewhere, filled out countless forms for me and yet still finds time to cook, clean and love me and our daughter with every ounce in her body.”

“I am the proud wife and caregiver to a United States Army veteran,” Ashlee said. “Like many other military wives who have been trained to expect the unexpected, I should have been prepared. But how can you truly prepare yourself for something like this?

“The phone call that every military spouse dreads informed me that my husband had lost both of his legs and one of his arms. They assure me they were doing everything they could to save him. As a young married couple with an 11 month old child, our lives were turned upside down in an instant. I left my job of eight years and packed up our daughter and moved to San Antonio to be by his side. We had no idea when we would be returning home.

“Many people often try to follow the recovery process of our nation’s injured soldiers,” she said. “What those people don’t get to see is what happens behind closed doors. Two years of therapy and going from a combat zone where you are ultimately forced to take care of yourself and your men to a hospital bed with 24-hour nursing care, not being able to move a muscle in your body, can be very grueling for a soldier and his family. I speak from experience because my family suffered extensively.

“We raised our daughter in small hotel room,” Ashlee said. “We dragged her around numerous hospitals and recovery centers. We had no choice. We really tried to give her the best life we could considering the situations we were faced with. I constantly felt like I was failing as a mother and the guilt I was feeling began taking a toll on my family.

“We suffered through two years of therapy,” Ashlee said. “There were good days, bad days, sad days, proud days, and some days that I never want to relive again in my life. But FINALLY we were retired from the military and were given orders to return back home to Kentucky. Honestly, I was more ready than ever. I couldn’t wait to be surrounded by the love of my family and friends. The previous two years had been rough and I was on the verge of a breakdown if I didn’t catch a break from that life.”

As Jack and Ashlee recount their saga, it is clear that at one point the patient had to become the caregiver. “I was struggling to find a balance between being my husband’s caregiver and being his wife. We both came to this agreement. I put all of my focus and effort into making sure that he and my daughter could readjust to civilian life. I was sure this is was what a caregiver was supposed to do, but I had it all wrong. I began losing weight, a total of 43 pounds in a four-month period. I wasn’t eating right, I rarely slept well and worst of all, I barricaded myself off from the love and support I needed the most. I was falling apart and too busy to even notice what was happening to me. But after reading an article on a term known as “caregiver burnout,” I realized that I too was a victim. If I didn’t start taking care of myself, I was going to die…and then who would take care of my family?”

Like many wounded veterans and their families, the Williams were living hand to mouth awaiting the VA’s adjudication of their retirement benefits. “It is a very long process,” Jack said. “Even a year after retiring, we were still waiting on some of the benefits we were entitled to. There is no way to fully prepare yourself for the trials you may face in the months or years of waiting for your compensation.”

In their hour of need, friends put Jack and Ashlee into contact with the Coalition to Salute America’s Heroes which provided them with badly needed financial support at a critical time. “I feel it is important that the Coalition exists,” Jack said. “Our families really do need the help sometimes and it is very nice to know that option is there.”

In addition to providing financial support, the Coalition provided Ashlee with a part-time job that she can do at home on her own schedule. “I began researching work-at-home jobs that I could do and still be able to be home in case J.D. needed me,” Ashlee said. “The Coalition is the ONLY organization that provides such an opportunity to veterans and caregivers. The Heroes Thanking Heroes program has truly changed my life. To be able to call donors and say thank you for supporting an organization that we truly believe in has been an incredibly rewarding experience for me. I can’t thank the Coalition enough for helping me find my balance as a wife and caregiver and providing me with an incredible opportunity.”

“By providing us with financial assistance when we needed it most, including a steady job for my wife Ashlee, the Coalition gave us back our dignity,” Jack said. “They gave us hope. I love seeing the joy on my wife’s face when she finishes making her thank you calls to donors for the day. Working again has boosted her confidence and in turn helped us to say thank you to the people who provide the support that saved my family.”