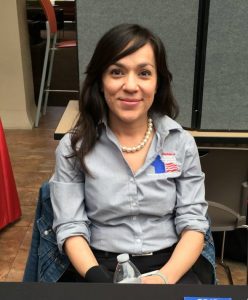 Mary Jessie Herrera, is from Somerton, a little town near Yuma, Arizona, not far from the Mexican border. A fourth generation American, Mary is the youngest of four. Her father worked as a manufactured home contractor. Her family is intensely religious and patriotic. “My grandmother, an American citizen, but due to unfortunate circumstances had to live in Mexico and had a taste of life in a country other than the land of the free,” Mary said. “As shot as my long-term memory is, I always remember her talking about the amplitude of opportunity in our country and what a privilege and honor it is to call it home. My granddad had the same attitude. They instilled in me the attitude that in this country, anyone willing to work hard can achieve anything.”

When she finished high school, Mary enrolled in a community college in Tucson. “I wanted to go into psychology,” she said. “I was fascinated by the way some people have so many struggles and seem to be all right in life, while others have the same problems but cannot handle them. My parents, now married 48 years, have had their share of trials and tribulations. They lost a daughter to leukemia and a son who was in a coma for two months after a car accident. When people lose children, they either make it or they don’t. My family has strong faith. I was born and raised a Catholic and am a practicing Catholic.”

Mary always wanted to go into the military, though no one else in her immediate family had a military background. “As a kid, I was always the one playing with toy soldiers,” she said. “My mother never knew where I got that from. I had an uncle who served in Vietnam where he earned several decorations, and a distant uncle who won the Congressional Medal of Honor.”

Mary was a sergeant in the Military Police. “The role of the MPs has changed,” she said. “It used to be a lot of stopping bar fights. Now the MPs are engaged in military support missions, going on patrols and handling EPWs (enemy prisoners of war). I never got to do garrison duty on a military base.”

When President Bush gave Saddam Hussein his ultimatum, Mary’s unit was on the Kuwaiti side of the border waiting to move into Iraq. “It was an honor for me to be part of that,” she said, “to be part of that story. I will tell my daughter about it when she is older.”

While on foot, Mary carried an M16 like other soldiers in addition to a 9 mm sidearm due to her position as a Military Police, but as the gunner on her Humvee she manned an MK (a 40 mm grenade launcher) and an M249 S.A.W. (semi-automatic weapon – a machine gun). “We were taking care of EPWs and providing security escorts for convoys. I was 22 at the time. Were a QRS – Quick Response Force. We were always coming and going, always in harm’s way. I did that for about eight months. It was exhausting, but I got to do the things the infantry boys do, the fun stuff I call it.”

Mary came into constant contact with Iraqis and was learning to speak Arabic quite well. “You see these impoverished people living in a war-torn country. They lived for so long under a brutal dictator, and now their country was being torn apart in a chaotic situation. It makes you realize how fortunate we are to live here in this country,” she said.

The Iraqi women were amazed to see a woman among the American soldiers. “I feel like I was some type of role model for the little girls over there,” she said. “When we came through town, I was sitting up in the turret of my Humvee wearing sunglasses with a rag around my head to keep the dust out of my hair and my hair out of my eyes. One day we were patrolling the small town of Balad where we went frequently. My driver called up to me, ‘Hey Herrera, look over there.’ There were four or five little girls sitting on a wall wearing sunglasses and rags on their heads. I have no idea where they got the sunglasses, but they were dressing like me.”

Mary was saddened to see how little Iraqi boys are encouraged to abuse little girls, even those older than they are. “That is their way of life,” she said. “The men dominate the women.” She said she never suffered any sort of sexual discrimination in the Army, or knew other female soldiers who had. “I was blessed,” she said. “Everyone treated me well. I know it goes on, but it is hard for me to believe. I was the only girl in my platoon. I would say, ‘When I get back to the States, I will wear a dress and high heels.’ The guys would laugh saying, ‘Herrera you will break those chopsticks.’ But they never treated me with disrespect. In my whole life, I have never felt as safe as I felt then in a war. There is nowhere I will ever be as a civilian in the States that I will know I have a team around me that will give their lives for me. There is a bond in the military. You may hate your sergeant or your driver, but when the rounds start flying, you are all one. I would give my life for them anytime, and they for me. You don’t say this out loud, but it is just understood.”

On November 8, 2003, Mary’s unit took prisoners to Fallujah. They were always happy to go there because the food was better, and Mary got to see her brother-in-law Peter Barwick, then an E-4, whom she had known since she was a child. They are very close. On the way back to their base, Mary was riding in the turret of the lead Humvee with her rocket launcher and machine gun at ready. She saw two spotters on a bridge and knew they were calling in coordinates to some hostiles. “I told the guy below me to pass the word we were going to get hit,” she said. “By the time I got back up, we were already being hit.”

Mary began returning the fire with her machine gun. She felt a flick on her right bicep and thought she had been hit by a rock. It was a bullet that passed through the flesh. She kept firing. “Then I got hit again,” she said, “and my arm fell into my lap. I had no feeling in my arm. I thought it had been blown off.” She yelled down to the guys for help, but they were all firing their weapons and could not hear her. She kicked the commander to get his attention. “The look on his face when he looked up at me, I knew it was bad,” she said.

In the back of the Humvee, one of Mary’s fellow soldiers put pressure on her wound while the convoy fought through the ambush. She had lost a lot of blood and her life was in peril. “I laid back and closed my eyes,” she said. “Someone slapped me and said, ‘Open your eyes.’ I remember thinking, this is it. My whole 22 years of life on earth are over. I felt a sense of peace, everything made sense. I have always had strong faith. I said to God, ‘If you need me for something, I am ready to go.’ I told him I was proud. I have led a pretty good life. But I grieved for my parents to think they would lose another child.”

She was airlifted to Fallujah where they did not have the capability to manage her mangled arm. She was sent on to Germany where the doctors told her they would have to amputate her arm. But when she came to, the arm was still there. They sent her on to Brooke Army Medical Center in San Antonio, Texas, where the medical staff led by the renowned Dr. Mark Bagg began the long process of reconstructing her arm. She was there for about year suffering through as many as 20 operations. It was during this period that the Coalition to Salute America’s Heroes appeared. “They paid off my school loans,” Mary said. “That was a huge burden off my shoulders.”

Today, Mary has only partial use of her right arm. She suffered extensive nerve damage. The missing radius was replaced with one from a cadaver. Her arm is held together with screws and plates. She can use her right hand a little bit, but has no feeling in it. She suffers from chronic pain, but has no regrets. “My parents raised me very well,” she said. “My faith is so concrete there is nothing I can’t handle, nothing I can’t deal with.”

Mary finished her college degree and is working on her master’s degree. She resides in Arizona and is raising her two daughters. She still communicates frequently with the officers and soldiers she served with. She is proud of our country, and proud she was able to serve. ★