Rob Jones grew up in Northern Virginia and attended Virginia Tech. He originally intended to study computer science, but like many students he became interested in other things. He graduated in 2007 with a degree in interdisciplinary studies, plus minors in astronomy and geology. 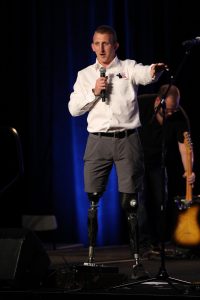 But by the time he finished college, Jones was in the Marine reserves. He completed basic training while he was still in college then became a member of the Fourth Combat Engineer Battalion, Bravo Division, a reserve unit based in Baltimore, MD. At one point, he planned to go to officer’s school, but when he finished his undergraduate work at Tech, he learned his unit was being deployed to Iraq. There was no chance he would stay in the States while his Marine buddies were going into a war zone. From January through August 2008, Jones’s unit was posted near the city of Habbaniyah in Al-Anbar Province, about 55 miles west of Baghdad, Iraq. “It had been very dangerous there a few years before, but by the time we got there it was relatively calm,” Jones said.

At the end of that tour, Jones rotated back to the states and took up residence in Blacksburg, VA, home of his alma mater. He worked a regular job on a traffic safety maintenance crew. All the while he continued attending weekend sessions of his Marine reserve unit. Then he got word that his unit would deploy again, this time to Afghanistan. In April 2010 he arrived in the city of Delaram in Western Afghanistan. His unit was soon shifted to Sangin, a district in the eastern portion of Helmand Province.

There Rob and his fellow Marines found the action was a as hot as it had been cold in Iraq. “People were shooting at us and we were shooting back,” Jones said. “We patrolled with the regular infantry on whatever combat missions they had.”

But as a combat engineer, Jones’s primary responsibility was finding IEDs before they could do damage to his comrades. He did not actually disarm the IEDs himself. “The standard procedure was to call the ordinance people who could come out and blow it up. But finding them was the tough part. “You quickly learn to search in places where the Taliban were likely to plant the IEDs,” Jones said. “They have limited resources and so they use them as efficiently as they can in terrain where we are likely to go, what we call choke points. For example, we naturally crossed over bridges a lot. We could wade through the water, but it can get pretty cold and no one wants to get wet.”

The established technique for finding IEDs is remarkably primitive given the sophistication of modern warfare. “You use your eyes, look for things that seem unnatural,” Jones said. “Nature is consistent. If you see where someone has been digging, even if they have tried to move the dirt back, there is an inconsistency in the color of the dirt. It seems out of place. So you swing a metal detector back and forth over the area. Even the most basic IEDs tend to have some metal in them.”

When you get a positive reading, though, there is only one way to check it out. “You get down on your knees and use your fingers to move the dirt away slowly and carefully,” he said. “If you find a pressure plate, you have your IED. You have to use your judgment.”

Jones was in Afghanistan for about four months when his luck ran out. “I must have done something wrong,” he said. “I was unconscious for several seconds. When that happens, your buddies cannot rush straight to you because the Taliban will plant extra IEDs to get first responders. But they got to me pretty quick. They put two tourniquets on each leg. They gave me something for the pain, put me on a stretcher, and then took me to a tank that carried me to a helicopter pad.” It was pretty obvious his legs were not going to make it. According to one of his friends, Jones demanded to know what all was missing. If it was more than his legs, he insisted that they “shoot me now.” But it was just his legs so he was good to go.

Jones was taken to Germany, and from there on to the Naval Medical Center in Bethesda, MD. Both of his legs were so badly damaged they could not be saved. Each was amputated above the knee. “I was there for a month,” he said. “The doctors and nurses were great. Everything went smoothly with me. The skin graphs worked and the wounds closed up. It was just a matter of waiting for it to heal.”

The blast also ruptured his eardrums which had to be replaced. Jones was then fitted with prosthetic limbs that enable him to walk and do most of the things that he did before he was wounded. The limbs are programmed to respond to weight distribution. He has learned to make them do what he wants them to do. He is retired from the military on 100 percent disability.

Jones had a positive attitude toward life before he was wounded which has helped him through this ordeal. He does not suffer from post-traumatic stress disorder (PTSD) like many wounded veterans do. “I had some hallucinations from the drugs they had me on,” he said, “but once I came off the drugs, that cleared up.”

His high school pal Ivan Kandar filmed and produced two emotional movies documenting Jones’s early years of recovery. Rob has always been a funny outgoing guy with a huge heart and as a result of his injuries he is emphatically devoted to helping other veterans. Always athletically inclined, Jones has learned to ride a bicycle, swim and run but his first adventure was rowing – a sport that emphasizes upper body strength. He started in the hospital training on a rowing machine. Then he got a chance to go to California, to train with Brad Lewis, a former Olympic medalist in rowing. Jones won the bronze medal for rowing in the 2012 Paralympic Games. But one big achievement was in bicycling. “Most people don’t understand just how difficult it is to ride a bike with prostheses,” he said during training. “Most people use their quads, calves and glutes to pedal, while I am only able to use my glutes.” In October of 2013, Rob undertook the challenge to ride his bike across the nation from Maine to Southern California to raise money for wounded veterans. It took him several months to make the 5,000 mile trek but anyone who knows him never doubted for a moment he would not make it – and he did, no snow nor rain even slowed him down , he was on a mission. He was recognized and cheered along the way by enthusiastic crowds. Altogether, he raised more than $125K which he donated. After this huge feat Rob then competed in paratriathlons across the globe.

Jones pushes hard every day to achieve personal greatness. This avid Orioles fan is currently playing on the Wounded Warrior Amputee Softball team and has announced his next adventure. This challenge will commence in the fall of 2017 as he sets out to run 31 marathons in 31 days! “In addition to raising funds, I hope to raise awareness concerning the struggle of America’s veteran population. A recent VA study estimates that twenty veterans from among every generation commit suicide every day. It is a tragedy that America is losing this many of its finest people, and we need to do all we can to halt these losses”, Rob said. Jones is a national spokesman for the Coalition and makes speeches to schools and provides counseling to other victims of war trauma. “I never had a problem keeping my spirits up,” he said. “I tell others in the same situation that I know they are going through a difficult time, but if they really work hard and put effort into recovery, they can get through to wherever they want to be. There is potential to transform this negative thing that has happened to you into something that can change your life for the better. When I am tempted to be bummed out, I remember that a lot of people are reacting to my positivity. It is a great advantage for someone in this situation to spend time with someone like me who got through it and is doing well. They know it is possible for them to do the same.”

Rob and his wife Pam reside in Middleburg, Va. with their new baby boy.  Visit www.robjonesjourney.com to follow him!