Senior Airman Daniel Acosta, who had received life-threatening injuries in Iraq Dec. 7 2006, southwest of Baghdad. Before his deployment to Iraq, 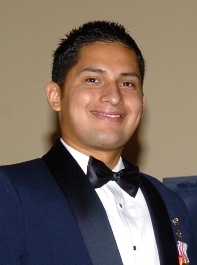 Acosta was an explosive ordnance disposal specialist assigned to the 775th Civil Engineer Squadron at Hill AFB. He was a member of the 447th Expeditionary Civil Engineer Squadron in Iraq on Dec. 7, and had already disarmed two improvised explosive devices that day. That’s all he remembered until he woke up in Brooke Army Medical Center in San Antonio six days later. Acosta recalled saying that he didn’t feel like dying that day, so he used his mini-mine sweeper for the two IEDs he and his teammates disarmed. It was the third one that got him. “I stepped on the pressure plate,” he said. “It wasn’t detected (by the metal detection device) because it was wood.” The IED that nearly claimed his life contained two 122 mm projectiles, Acosta said. His left arm was blown off in the blast, and he received third-degree burns to his legs. He also sustained arterial injuries to his leg and heart. “In the back of my head I always knew that something could happen,” Acosta said. He and the airmen on his team had undergone combat life-saving training at Fort Carson, Colo., and he attributed that training, applied by his teammate Staff Sgt. Joe Upton, to his survival. He said the first tourniquet Upton used didn’t stop the bleeding from his severed arm, so the teammate took a water tank strap off of their Humvee and was able to use it as a tourniquet. Also, he said, there was a medic on the scene. “They (doctors) gave me a 25 percent chance of living,” he said. “If I made it through surgery, I’d have a 50 percent chance. Acosta’s training in explosive ordnance disposal included 11 months of technical school at Eglin AFB, Fla., and three months pre-deployment training at Utah Test and Training Range at Hill AFB. He said he underwent nearly three weeks additional training in Kuwait before deploying to Sather Air Base at Baghdad International Airport. He had been in Iraq performing the EOD mission for three months before he was injured in the blast.

Since his retirement from service, Dan has held a top position with Aon Insurance’s client loss prevention department in Chicago, IL, and currently services as a Senior Caseworker with the Will County Veterans Assistance program in Joliet, IL.