Shilo Harris came from a family with deep roots in military service. As a son of a Vietnam veteran, Shilo always knew he wanted to be a soldier. On September 11th his life changed forever: shortly afterward he enlisted as a Cavalry Scout in the US Army. His first deployment was to 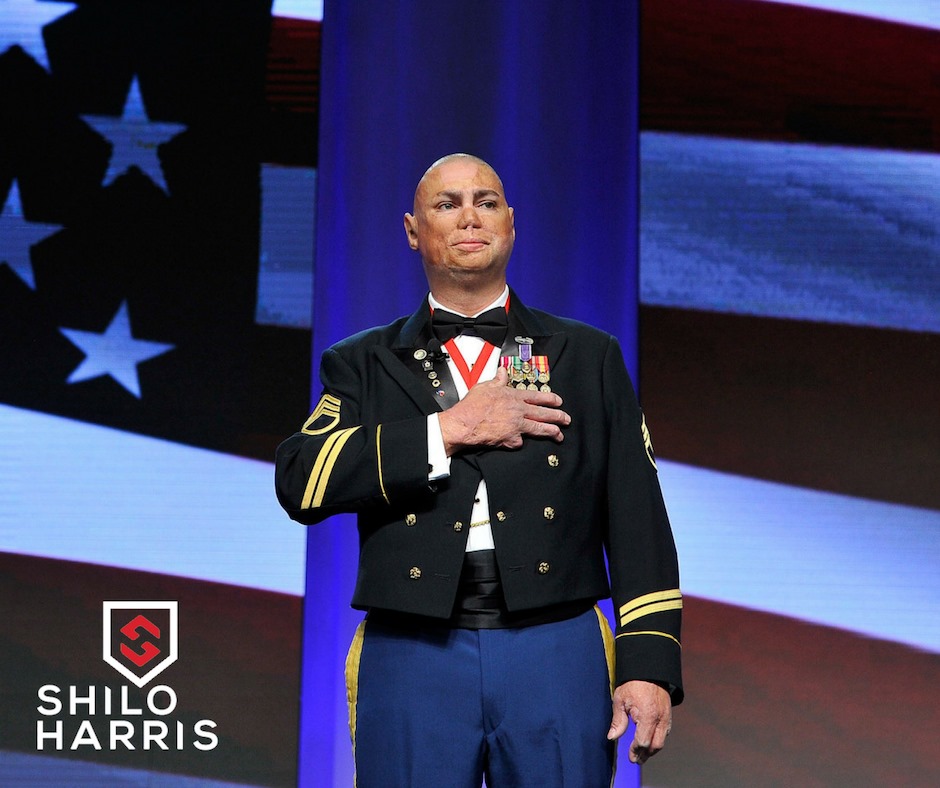 On his second deployment with the 10th Mountain Division, he was assigned and worked near southern Baghdad. On February 19, 2007, Harris’ armored vehicle was struck by an improvised explosive device (IED). The explosion injured the driver and ended the lives of three of his fellow soldiers. Shilo survived but with severe third degree burns on 35% of his body. The severity of the burns meant the loss of Shilo’s ears, the tip of his nose and three fingers. The crushing explosion fractured his left collarbone and C-7 vertebrae.

The devastating injuries forced Shilo to remain in a medically induced coma for 48 days; after, he spent nearly three years recovering and undergoing intensive physical therapy at the burn unit of Brooke Army Medical Center (BAMC) in San Antonio, TX. While at BAMC, he was the first soldier to participate in cutting-edge regenerative stem-cell research to regrow his fingers, and later received prosthetic ears. Shilo’s recovery has involved more than 75 surgeries, which required his family to spend up to six hours a day on wound care. Shilo also struggled from PTSD. In 2010 he was medically retired from the Army. Shilo reflects on his time in the service and his injuries: “Everything in life is a gift. Sometimes it may not be the gift you want but you realize that your challenges are a new beginning.”

Shilo is a family man who is committed to his wife, five children, step-children and is a devout Christian. Today, Shilo is a motivational speaker and Coalition National Spokesman, sharing his story with groups around the country, raising awareness for wounded veterans and serving as an inspiration to fellow soldiers.

“I realize that God has given me a chance at a better life. I have made a choice that I will not let the bad things define who I am or who I will be. My past will be tools for my future, as I have learned from those things. The scars don’t make the man, they make him stronger! I am stronger and have many blessings in my life. I will make better decisions now and in the future. I will be the better man.”